Fights With his Demons

Aligern is a potential companion in Torment: Tides of Numenera. He and Callistege are mutually exclusive, as they both stubbornly refuse to travel together.

Aligern is a hardened nano who fights with his demons. He was once an Aeon Priest in a small western village, but has a falling out with the Order of Truth, who thought him obsessed with his research and refused to aid it in any way. He now lives in Sagus Cliffs' Underbelly.

Aligern has writhing tattoos all around his forearms, that seem to have a life of their own. He uses them in combat, but thinks of them as his curse, which he says he was born with.

Along with Callistege, Aligern discovers the Last Castoff in the Reef of Fallen Worlds, after their crash. Convinced that they are the Changing God, and not a newly abandoned castoff, he insists on accompanying them. Callistege also wishes to join the party, for her own reasons. Aligern and Callistege cannot seem to get along, and get into another argument before even leaving the area.

The Last Castoff must then choose between them. If Aligern is not chosen, he leaves for the Underbelly. He holds no grudge towards the Last Castoff, and can be added to the party later, provided Callistege is not in it.

Aligern starts off with 6 Might, 2 Speed and 6 Intellect. The maximum effort he can apply to any task is 3.

He has the Innervate and Living Tattoos esoteries and the Resourceful ability, Aligern's Coat and Aligern's Vest.

In terms of skills, Aligern is trained in Concentration, Cypher Use, Endurance, Lore: Machinery, Smashing and Medium Weapons. He has inabilities when it comes to Running, Stealth and Heavy Weapons.

Concept art for Aligern, from the 2015 conference at EGX REZZED 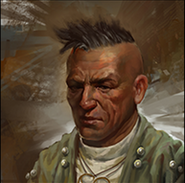 Portrait of Aligern from a previous beta of the game
Add a photo to this gallery
Retrieved from "https://torment.fandom.com/wiki/Aligern?oldid=17797"
Community content is available under CC-BY-SA unless otherwise noted.