Callistege is a potential companion in Torment: Tides of Numenera. She and Aligern are mutually exclusive, as they both stubbornly refuse to travel together.

Callistege is a dimension-shifting nano who pierces realities, and is always surrounded by multitudes of other versions of herself from other dimensions that she calls "sisters". Each reflection of herself moves with her, and seem aware of what is happening at every moment: they react to events in her life in different ways, and might give away her feelings when she herself betrays nothing.

Along with Aligern, Callistege discovers the Last Castoff in the Reef of Fallen Worlds, after their crash. Both insist on accompanying the Last Castoff, although they have very different ideas of where to go and what to do. But their companionship is short lived, as Aligern and Callistege get into another argument before even leaving the area.

The Last Castoff must choose between them. If Callistege is not chosen, she leaves for the Order of Truth. She holds no grudge towards the Last Castoff, and can be added to the party later, provided Aligern is not in it. 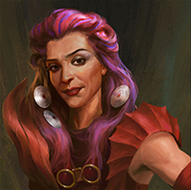 Portrait of Callistege, from an earlier beta build of the game
Add a photo to this gallery
Retrieved from "https://torment.fandom.com/wiki/Callistege?oldid=16497"
Community content is available under CC-BY-SA unless otherwise noted.