This modron seems to be subtly different from the others you have seen. It carries a pair of crossbows in its four arms, and it seems to be taking an active interest in your behavior.

Nordom Whistleklik is a Modron, a society of Law and Order taken to its logical extreme. He is voiced by Dan Castellaneta.

Nodrom's altered function is responsible for his Chaotic Neutral alignment. He has "gone rogue" after being exposed to the raw elemental chaos of Limbo, wherein the Modron construct of the Rubikon Dungeon Project floats: the Modron Maze. While separated from the Modron hive mind, he remains a mechanical thinker, using few verbs and many colons and equals signs. While often referred to as "he" and having a masculine-sounding voice, Nordom is genderless. He chose his name after The Nameless One inadvertently referred to him as a "backwards Modron." He attacks with a pair of 'gear spirits' in the form of crossbows, making him one of only two in-game characters able to attack from a distance.

All characters except Ignus, Vhailor and Nordom have a morale rating, and they will leave the party if it gets too low.

For reasons beyond mortal comprehension, Nordom was changed to Lawful Neutral in the "Enhanced" Edition, despite being a character in literal revolt against cosmic Law.

Nordom is a very confused creature, unused to his new individuality; he is as pleased to receive a new personal name as he is to be commanded to obey. He is not entirely certain what happened to him to split him away from Mechanus, but being given a role in The Nameless One's party comforts him and gives him focus, whether because he is used to being part of a hierarchy, or because he needs to be around the individuals he now feels himself to be.

Fall-from-Grace has advice on Nordom, based on her knowledge of Modron society. This gives some small insight to the player into the dialogue trees with Nordom that allow him to upgrade.

Nordom is sort of a secret character, as his location is hidden behind several layers of independent actions unlinked by game hints. He can only be found by buying the Metallic Cube from the exotic items section of the Curiosity Shop. It turns out to be a Modron Cube, an articulated figurine in the shape of a Modron. Even then, The Nameless One can do nothing with the Cube directly, but must speak either with the Modrons in the Brothel for Slaking Intellectual Lusts or ask Yvana, the owner of Art and Curio Galleria to learn that the Cube is a portal, and then solve an elimination puzzle, manipulating the figurine's extremities through dialogue choices, whereupon the party is teleported to the maze of the Modron Cube, which is notoriously hard to navigate.

It is recommended to come prepared for a very long dungeon crawl in the Modron Maze; a score or two of Blood Charms at least can be used up getting to Nordom if Fall-from-Grace is not in the party, and twice that to get to the Evil Wizard Construct as well (1,440-2,880 Copper commons). The party will have to return to the room at the beginning of the maze to Rest.

The Hard version of the maze is 61 square rooms, the two-square boss room, and Nordom's Room, in an eight-by-eight square; everytime the maze difficulty is reset in the control room, the doorways on each side of the rooms are opened or closed, making a maze with a different configuration. A Portal Lens is the easiest way out of the maze, (otherwise the party must navigate the maze back to the control room) and unless the party is lucky enough to find one as loot, they must make it to the Evil Wizard Construct and defeat it; it always drops one.

The enemies respawn every time the party leaves Rubikon, until the Wizard Construct is defeated. The Portal Lens will teleport the party back and forth between various points in Sigil and the Rubikon maze start point.

Like Dak'kon and Morte, Nordom can be have his attributes increased through dialogue. With the right attributes, the Nameless One can reprogram Nordom making him more powerful, not to mention less troubled. He has no experience with humanoid social cues, so he often misses the point of jokes or barbs by other party members. Under proper direction from The Nameless One, who he believes to be the equivalent of his Mechanus superiors, he can modify his body to become stronger, stealthier, and/or smarter.

Nordom's upgraded hardened metal casing with an AC of -3 is much more than need be expected of a party member that attacks from a distance. His AC is better than the nimble and hard-to-hit Annah before adding accessories, although a couple of -2 AC Stinger Earrings, or one and the Punch Daggers of Zar'anun, is all she needs to best his protection. He can also use rings.

B. The Director upgrade: You must ask the Evil Wizard Construct what he did with the previous Creative Director; this can be done before or after obtaining Nordom. Ask again how Nordom came to be at Rubikon, only this time ask about the Field Test, and tell him that the previous Director is dead; he is crestfallen, but immediately cheers up even more if told that The Nameless One is the new Director. He gets +1 Int and Dex and again, 36,000 XP

Once TNO has ascertained that he can order Nordom to do anything, look for the sensible options, which are all dependent on TNO's current class and attributes (all 3 upgrades can be selected if TNO switches to another class after selecting an upgrade):

There is no way out of the maze without a Portal Lens, and unless the party is lucky enough to find one as loot, they must make it to the Wizard Construct and defeat it; it always drops one, along with a Mechanus' Cannon scroll.

As of the Enhanced Edition, teleporting out does not respawn the enemies or reconfigure the maze. It appears as though, once every last High Threat Construct outside of the boss room has been killed, no new ones will spawn, but instead the maze will reconfigure, when the party teleports out and back in. The team cannot be reformed while in the maze. This gives a few options. The player can kill all the enemies with a full party of six, leave, and navigate a new configuration, with Nordom's room and the boss room still in the same locations. Or fight through the enemies with a full party of six until they find Nordom, and then, with the benefit of any map they might have made for themselves, run back to Nordom with five team members. Or bring only five team members to start with (someone must be, or have been, booted from the party if both Fall-from-Grace and Ignus have joined)

The player can always rest in the Modron Foyer room, between the Control Room and the maze proper, and regain spells, particularly Fall-from-Grace's heal spells, which save on healing items.

Unlike all the other Modrons in the game, who have a pair of arms, a pair of legs, and a pair of wings as their limbs, Nordom has chosen to replace his wings with a second set of arms; he can both aim and reload a pair of crossbows at a time (on the equipment screen, he has only one). If the player has not armed Nordom with special crossbow bolts, the gear spirits can create an infinite number of ordinary bolts for Nordom to fire at his enemies.

Lens ocular gear (aiming devices Nodrom wears in the same slot as other characters do Earrings) and crossbow bolt ammunition drop in the Modron Maze[2] Nordom is the only companion in the game with Missile weapon proficiency who can use crossbow bolts. His crossbows never change, so bolts and his Lens gear are the only way outside of affecting his Str, to affect his damage. Damage of all bolts is calculated with Missile weapon proficiency. There is a wide array of lenses and crossbow bolts, each with many different abilities, allowing tactical variation against different types of opponents.

Nordom, like all the other party members, can have quirky conversations about various topics with the Nameless One.

There is experience and alignment adjustments to be gained through these conversations, although Nordom doesn't have a morale rating, unlike some companions.

In addition to unique fighting moves, each character has their own running animation, 'breathing' animation, and intermittent 'fidget' animation.

After a period of no activity by the player with mouse or keyboard, characters will randomly speak 'bored' pronouncements. They will occasionally speak dialogue expressing their mood or sentiments, particularly in relation to other companions, or a particular location. And they will engage in conversations with certain of their fellow party members. 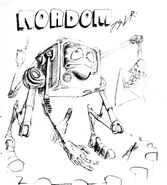 Add a photo to this gallery

Retrieved from "https://torment.fandom.com/wiki/Nordom?oldid=18177"
Community content is available under CC-BY-SA unless otherwise noted.