"A... fair-skinned one... He lies, lies beyond my keeping, in another cage, in another prison..." —Ravel Puzzlewell

Trias, also referred to as Trias the Betrayer and Trias the Condemned, is a character in Planescape: Torment. He is first encountered within the Curst Prison, but must later be confronted in Curst in Carceri.

Within Curst's prison waits Trias, chained, sword-less, and injured. He explains to the Nameless One that he cannot be freed until he has been the recipient of an act of kindness, mercy, and justice.

Trias agrees to help the Nameless One after he has been set free. His sword Celestial Fire has been taken from him and is being kept under guard somewhere in the prison. He suggests that returning it to him would serve as a suitable act of kindness and would end his imprisonment.

The sword must be retrieved from Cassius, either by successfully completing one of Cassius' "tests" or by besting him in combat. (See Curst Prison for more information.) After, the sword can be taken.

After being defeated in combat, he yields and is willing to speak to the Nameless One. The Fortress of Regrets, Trias reveals, can be reached through a portal in the Mortuary. The portal's key is *regret* – a scrap of flesh must be torn off and have the word "regret" inscribed upon it for the portal to open.

After this has been learned, there are two courses of action:

It is very important to note that if Vhailor is a current party member, he will kill Trias in the name of justice. The Nameless One suffers no alignment shift if Vhailor is the one to kill Trias, and all of the XP is still gained. However this will cause the Tattoo of the Redeemer to become unavailable and replaced with the Tattoo of the Betrayer. 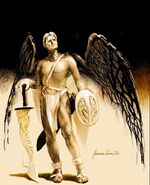 Concept art for Trias by James Lim.
Add a photo to this gallery

Trias is played by John De Lancie, who was Dr. Death in LucasArts' 1997 Outlaws game, with a game engine that could display panoramas at distances that other games could only be envious of, the primary villain in the Interstate '76 vehicular combat game, and the protagonists' father in Assassin's Creed: Revelations. But he may be best known as the arrogant and omnipotent Q in Star Trek: The Next Generation and associated video games in that role.

Retrieved from "https://torment.fandom.com/wiki/Trias?oldid=17187"
Community content is available under CC-BY-SA unless otherwise noted.