Planescape: Torment
The Weeping Stone Catacombs are a sprawling collection of tombs and vaults buried under Sigil's Hive.

Access to this area is restricted by Pharod, and Barr will not let the party through until they have spoken to his boss. Once the party is in the catacombs, they will not be able to return to the Buried Village without paying Barr a bribe, unless

There are many hostile creatures in the area:

And a few corpses that can be spoken to after learning the Stories-Bones-Tell ability:

Crypt of the Embraced[edit | edit source]

In the Crypt of the Embraced (entrance at X=2400 Y=360), is a large tomb and several smaller ones, all in pristine condition despite the age of the crypt. Opening the big tomb prompts three Ghouls to appear. They are tough, but reward 420 XP each (and high quality loot) when killed.

Inside the big tomb is Gris, who visibly dies a grisly death. He can be conversed with once the Nameless One learns the Stories-Bones-Tell ability.

Near the entrance to the Crypt of the Embraced lies the Shattered Crypt (entrance at X=3200 Y=650). Piles of bones are scattered in the back of the crypt. Crossing the center of the crypt causes a number of Lesser Vargouilles appear and attack. They are worth 200 XP each. The number of vargouilles can vary from 2 to at least 20, possibly dependent on the level of the party. Area effects such as insect swarms can help here. Punch daggers and 510 Copper Commons can be found here.

The back wall has holes covered in "aromatic slime".

The Mosaic Crypt (entrance at X=230 Y=1550) contains only a few traps (the one in the center is particularly potent) and a tomb, in which several coppers and an enchanted hammer can be found.

The Crypt of Dismemberment (entrance at X=330 Y=870) contains many traps, so it might be wise to send only one companion down the hall, Morte, for instance. The tomb doesn't have much of value, but on the left side of the tomb is a trap door that leads to a lower level, where a few Cranium Rats crawl in an enormous pool of blood, guts and severed limbs, and scatter when the Nameless One arrives.

The body near the pool of blood (X=1150 Y=910) has a severed arm, which turns out to be the Nameless One's. This arm should be shown to Fell, who may be able to decipher some of the tattoos on it.

In the pool of blood lies another body (X=930 Y=950), nearly indistinguishable from the rest. It is Lowden, who can be spoken to after the Nameless One learns the Stories-Bones-Tell ability. (Note: In the vanilla game, it can be very difficult to initiate dialogue with Lowden, since the trigger is overlapped by the blood puddle's info. This issue is fixed with Qwinn's Fixpack)

There are quite a few items to be looted in this area. 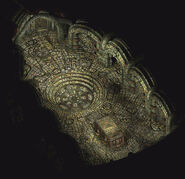 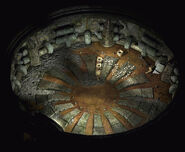 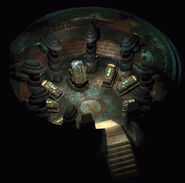 Crypt of the Embraced 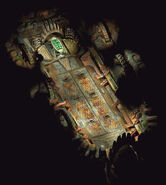 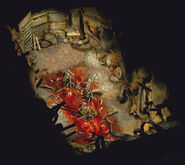 Crypt of Dismemberment, lower level
Add a photo to this gallery

Retrieved from "https://torment.fandom.com/wiki/Weeping_Stone_Catacombs?oldid=17935"
Community content is available under CC-BY-SA unless otherwise noted.